Saabs comparatively untuned standard card also made good competition cars, but they were not quite good enough for participation in international events under the rules in force during the early 1950s. To win the important race and rallies, a GT car was needed – and Saab had one on show at the 1956 Stockholm Motor Show.
It began as a private projects for Rolf Mellde who was a development engineer at Saab. Although Rolfs ideas were taken over officially, he and his smal group of assistants had to work on the projects in their spare time and not in the factory itself. 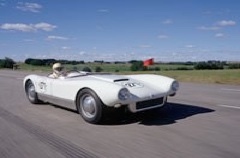 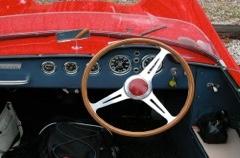 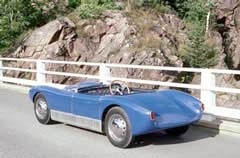 The car they built had an advanced monocoque frame of aluminium, which combined lightness with strength. The power unit was from a Saab 93 – three cylinders, 748 cc, a three-speed gearbox mounted back to front, i.e. with the gearbox forward of the engine. This also involved changing the direction of rotation of the engine so that the three speeds would be forward gears. The engine was also tuned to deliver 57.5 bhp from original 33 bhp.

Designed by stylist Sixten Sason, the bodywork was made of glass fibre reinforced plastic – a completely new material for car bodies in 1956. In full road trim, the Saab Sonett weighs only 500 kg and it matched its contempories in terms of acceleration and maximum speed – the standing kilometre in 36 seconds and 160 km/h respectively. Maximum speed was slightly different to that announced beforehand.
The Saab Sonett was considered to be such a successful prototype that a small run of six cars was built. They were tested and entered in a few circuit races.

Then the competition rules were changed so that it became possible to tune standard cars. That made the Saab 93 competitive overnight. The Sonett was no longer needed and the project was discontinued. All of the first six Sonett I are still in existence, where of 3 in Sweden and 3 abroad.
Out of the 3 in Sweden, 2 are in the Saab Museum in Trollhättan.