Saab Sonett V4 Since the V4 engine had been introduced in the 96 and 95 models, it was also decided that it should go into the Sonett. The 1968 and 1969 Sonetts can be recognized because of the ”bubble” on top of the hood. It is there to allow space for the larger engine and the air cleaner. To drive a Saab Sonett was to drive a true sports car. Once you had succeeded in the contortions necessary to get into the car, and had settled down in the form-fitting seat, you sat very low and quite hard, but not uncomfortable. 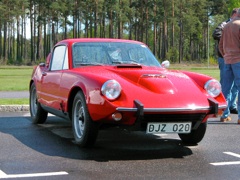 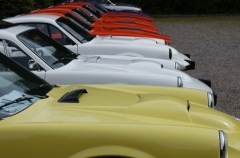 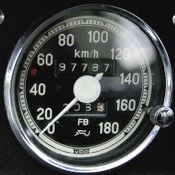 The suspension was stiff and the car was very steady in curves, even at high speeds. The driving position was inspiring and the leather covered wheel easy to handle. You could really straight-arm drive it. As long as the car had its two-cycle engine and was called Sonett II, it was a pretty good racing car. But competition became harder once it had its new V4 engine and had moved into the 1.5 litre class, without any greater increase in either power or speed. Both three- and four-cylinder Sonetts needed about 12.5 seconds to go from 0 to 60 mph and both had a top speed of about 100 mph.

Sonett II weighed in at 740 kg (1630 lb.) with its 60 litre (16 gal.) fuel tank topped off, while the 5 horse power stronger Sonett V4 was 35 kg (77 lb.) heavier. The reason the car was modified for 1968 despite the 2-cycle´s racing advantage was because it was never designed as a race car. The basic idea was to add the Saab image, especially in America, and to broaden the model line-up for American Saab dealers.

For American market conditions, the four-cycle engine was preferred. In the 1968 American Sonett brochure all of the car’s finer points and safety details were outlined, along with performance data, and then the writer asked if this really wasn’t more than enough performance. Interested Sonett prospects were told to visit their nearest Saab dealer and ”ask for the Toy Department”. Maybe not as serious as some may have felt it should be, but this was one way of declaring that this was a very special car that didn’t have any pretences, other than being a quick, small, sporty, and appealing every-day Saab. Totally, 1610 Saab Sonett II V4 were produced.