Saab Sonett II Project 97, Saab Sonett II, had advanced so far by early spring 1966 that prototypes could be displayed at both the Geneva and New York Auto Shows, and one car, for test driving was also available in Geneva. Somewhat later in 1966 a prototype series of 24 units could be built. Series production, however, did not begin until towards the end of 1966, and by that time many details had been added or been modified. 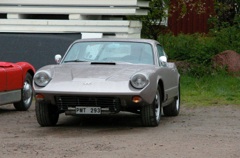 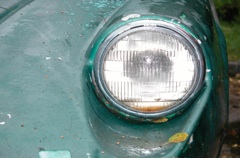 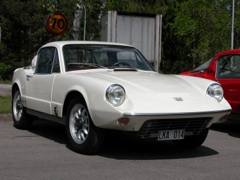 Among them brakes, ventilation system, grill and parking lights. Saab Sonett II looked similar to the MFI 13, but did have some changes; as well the design as material of the body was changed. The body was manufactured of fibreglass and the car weighed 1562 lbs. with full service load and was 148 in. long. The engine was a three-cylinder two-stroke with three horizontal carburettors, 841 cc displacement, developing 60 hp, DIN. Top speed was in the vicinity of 105 mph.

Production of the Sonett was located in an ASJ, Swedish Railroad Works facility in Arlöv in southernmost Sweden. Totally, 258 Saab Sonett II were produced. Practically all of the Sonett production has been exported, primarily to the United States.